I study ostracods, or ostracodes, depending on your preference. Not octapods, as my father-in-law might tell you, but ostracods: Crustaceans of the class Ostracoda. Why you might ask? Well, the origin story is told at the beginning of this post.

Still, you may be asking, WHAT is an ostracod anyway? Many people, even biologists have never heard of an ostracod. This is why I carry a picture of an ostracods in my wallet, sandwiched between my credit cards and photos of my kids. Well, to promote ostracods to the seven readers of this blog, I've decided I would like to start a series of posts introducing ostracods and their amazing biology. I shall dub this series my "ostra-blogs". To kick things off, I'd like to tell you a little bit about Gigantocypris.

Gigantocypris is a deep-sea ostracod, living at around 1000m depth as plankton. Most ostracods are pretty small around half to 2 mm - barely visible to pepper corn sized. Gigantocypris, true to their name are ostracod giants, up to 3 cm in width - ping pong ball-sized. They are caught from big research ships in plankton nets. I've never had the pleasure of collecting one myself, but a colleague very kindly sent one to me by FedEx, so I could see one alive. In life, where people live at least, they are orange-red in color. But in their native deep sea habitat, long wavelength light does not penetrate the ocean very far, so their orange pigment would not reflect any light. Another kind colleague sent me some preserved specimens in ethanol from a ship that sailed the Pacific off South America. The alcohol preservative bleaches pigments and the ostracods turn a ghostly, semi-opaque white. When I grab the test tube, I always think of cocktail onions floating the the liquid - Gigantocypris martini anyone?


Perhaps the most amazing feature of Gigantocypris is their eyes. In most animals' eyes, light is bent and focused with lenses. But a select few bend light with mirrors. Gigantocypris is one of the few, bearing a huge pair of parabolic reflectors behind light sensitive patches. The naturalist Alistair Hardy described the animals this this way in 1959:

The paired eyes have huge metallic-looking reflectors
behind them, making them appear like the headlamps of
a large car; they look out through glass-like windows in
the otherwise orange carapace and no doubt these concave
mirrors behind serve instead of a lens in front.

Mike Land worked out the optics of these incredible eyes. Gigantocypris doesn't focus light beams on to a single point. Instead, a line of focus is made along an elongated retina. These animals probably are maximizing the detection of light out to their sides. There is essentially no sunlight at the depths where we find Gigantocypris, so Land suggests that Gigantocypris is detecting light created by bioluminescent animals. Gigantocypris is, in fact, a predator. Small fishes have even been found in their guts, great fun for an ostracodologist like me, used to painstakingly sorting sand grains from ostracods!

Gigantocypris is probably the most famous of ostracods (with the possible exception of Umihotaru, which will be the subject of another ostra-blog, I'm sure). Gigantocypris having made it to MBARI's deep sea poster (mid-right, #26) and if you watch Blue Planet carefully, you can catch a video glimpse.

I will leave you with some fantastic photos of this beautiful animal that are available on the web. 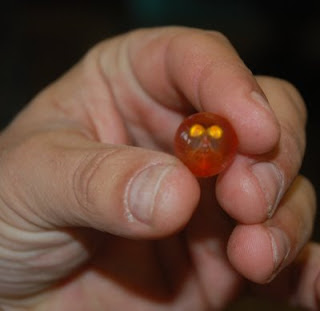 Charismatic aren't they? (Picture from this polar scientist''s blog)

The picture below is a side view. This one is "pregnant".

Other images are also online. Try this search.
Posted by Todd Oakley at 9:32 PM

That is a giant ostracod!And very beautiful! With parabolic reflectors...how cool is that?

"...a select few bend light with mirrors."
Now I have to know more. Which others?

Keir - Scallops have concave mirror eyes, similar in principle to Gigantocypris. Scallops have a bunch of eyes all along the edge of the mantle (on both their left and right side, sometimes asymmetric). These eyes often look silvery in close up photos of scallops.

If you are interested in the diversity of eye optics, I recommend the book Animal Eyes by Land and Nilsson. There is some evolution in there as well.