How predictable is evolution? If we could travel back in time 4 billion years and make a few changes, what would remain the same upon our return? This is an enduring topic of evolutionary inquiry (and movies and sci-fi shorts for that matter).

In his book Life's Solution, Conway-Morris made the case for a semblance of predictability in evolution. He argued that convergence - the independent origin of similar traits - represents an element of predictability in evolution. Octopus and humans have outwardly similar eye designs, so if we reply animal history over and over, these camera-type eyes would likely evolve in most replays.

Here I'll describe a truly amazing molecular convergence that was not discussed by Conway-Morris: the independent evolution of opsin proteins (a protein responsible for light perception) in two different groups of organisms. It turns out that a 7-transmembrane protein (opsin), bound to a light reactive chemical on the 7th transmembrane domain, has evolved twice to sense light!

If we could go back a few billion years and replay the evolution of life on earth a few times, chances are, opsins would evolve in many of our replicates.

[Disclaimer - the following is text from an encyclopedia article I've been asked to write on opsin evolution, so the writing style is a bit terse from here on out. I will add a little bit though, specially for the blog. But since many people I know think opsin originated only once, I feel it's my duty to spread the word of opsin convergence, starting here, at Evolutionary Novelties].


What is opsin and rhodopsin?
Opsins are a group of proteins that underlie the molecular basis of various light sensing systems including phototaxis, circadian (daily) rhythms, eye sight, and a type of photosynthesis. Opsins are sometimes called retinylidene proteins because they bind to a light-activated, non-protein chromophore called retinal (retinaldehyde). Opsins are also in some cases called “rhodopsins”, a name originally given to isolated visual pigments that contained both opsin protein and non-protein chromophore in a time before the two separate components were known. Today, the term “Rhodopsin” is used commonly to describe the opsin expressed in vertebrate rod (dim-light) photoreceptors, and the opsins of certain organismal groups, like bacteria. All opsin proteins are embedded in cell membranes, crossing the membrane seven times.

Type I opsins are present in bacteria and algae and are referred to by various names, including bacteriorhodopsin, bacterial sensory rhodopsins, channelrhodopsin, halorhodopsin, and proteorhodopsin. Type I opsins have varied function, including bacterial photosynthesis (bacteriorhodopsin), which is mediated by pumping protons into the cell, and phototaxis (channelrhodopsin), which is mediated by depolarizing the cell membrane. Type II opsins are present in eumetazoans (animals not including sponges), but are unknown from sponges or any non-animals. Because opsins are known from cnidarians and bilaterian animals (animals with bilateral symmetry, including humans, flies, and earthworms), Type II opsins are inferred to have been present in their common ancestor, which lived about 600 million years ago. Type II opsins have varied function, including phototransduction and vision, circadian rhythm entrainment, mediating papillary light reflex (pupil constriction), and photoisomerization (recycling the chromophore).

No significant similarity was found


Second, the orientation of the transmembrane domains differs between the major groups. We now have crystal structure data for both Type I and Type II opsins, and the arrangements of the parts of the protein that are stuck in the cell membrane are quite different, inconsistent with a single origin of opsins (unless this changed a lot during evolution, which is not impossible).


Exhibit B. Type I on the left, Type 2 on the right. Denser lines are positions of transmembrane domains. Figure is from Spudich et al (2000) 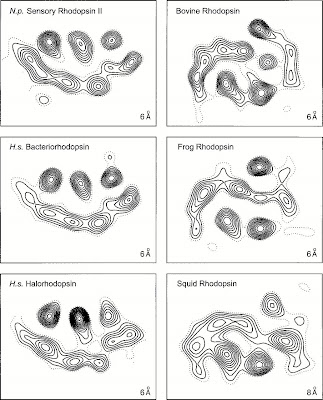 
Exhibit C. Type I on the left, Type 2 on the right. Chromophore chemistry differs. Figure is from Spudich et al (2000) 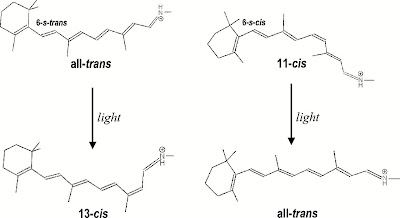 Fourth, Type II opsins belong to the larger protein family called G-protein coupled receptors (GPCRs), which transmit varied signals from outside to inside cells by activating GTPase proteins, which in turn signal to second messengers that affect the state of the cell in various ways. Type I opsins do not activate G-proteins. Furthermore, Type II opsins are more closely related to non-opsin, light insenstive GPCR’s than they are to Type I opsins. So even if there is some very, very distant and *undetectable* common origin of Type I and Type II opsins, chromophore binding likely evolved twice. Since chromophore binding is what allows photosensitivity, it is the crux of being an opsin (but see), and the realization that Type II opsins are closer to non-opsin GPCR's than Type I opsins is strong support for two separate origins. 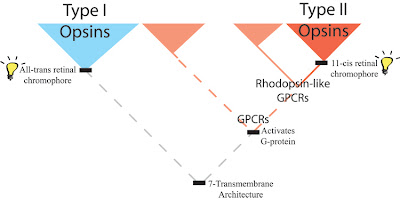 Finally, with two CS students, I tested the single origin hypothesis in a different way and found no support. Type I opsins show similarity of membrane domains 1-2-3 and 5-6-7, consistent with an origin by duplicating a 3-domain protein (and adding one). However, Type II opsins show no such similarity. If they Type I and Type II share a single origin, the duplication pattern of the domains should be shared too (unless there were drastically different rates of evolution in the 2 lineages, which is not impossible). This work is described here: Larusso et al (2008) J Mol Ev.

Where do pinopsin, melanopsin and non-mammalian deep-brain opsins fall on the tree?

coturnix - These are well nested within Type-II opsins.

Pinopsin is a ciliary opsin. Melanopsin is a rhabdomeric opsin. Off hand, I am not sure what is a "deep-brain" opsin. I think this might just be another name for melanopsin, but I'd have to check that.

One can see the major clades of Type II opsins on our Plos-1 paper!

(For some reason, Plos-1 is showing up as TINY in my Firefox browser these days, hmmm)....

I don't know if the deep-brain opsins were ever sequenced. That was old literature in which probes for opsins were found to bind to various groups of cells, mostly in the hypothalamus, of various species of birds, reptiles, amphibians, fish and lampreys. This was important for (then controversial, now accepted) notion of extra-retinal photoreception (for photoperiodism and circadian entrainment) in non-mammalian vertebrates.

I was also quite excited when this paper came out - it made some things much clearer.

coturnix - are you referring to VAL-opsin? That's a non-visual non-pineal brain opsin in zebrafish and ciona(?) Terakita stuck it in as a sister group to other vertebrate opsins.

It is an interesting concept that convergence is a kind of ortogenic factor of evolution. For non-biologists readers, here a good review to learn what adaptive convergence is (go to question 24): evolution theory.

can't believe I missed this when I was out sick ... nice post ... and in the spirit of research blogging ... a few of us at davis have been talking about putting in a grant on studying evolution and convergence of opsins (I of course care mostly about the ones in microbes) ... would you (i.e., Todd) have any interest in being involved?

Don't know much about bacteria opsins, but in fishes the same 'key site haplotypes' have evolved independently in different lineages. And, if one looks only for the independent evolution of particular amino acids at key sites, there are many more examples of convergence.

My original motive for searching the web for opsin was to find a short cut the the answer to the question: When did the major subtypes of opsins evolve? Humans have a short wave-sensitive called SWS1 (or blue opsin) and two long wave-sensitive opsins (LWS and the other happens to be called MWS, or the middle wave-sensitive opsin because a few mutations have shifted its sensitivity), but there are also RH2 and SWS2 opsins in other vertebrates. And, RH1 opsins in rod cells for dim light vision. What other species have them all?

You should check the couple of papers in Current Biology that investigated opsins from the agnathan Geotria. There are trees in two papers, one by Pisani and one by Collin, with slightly different results. The suggestion is that the color vision opsins pre-date living vertebrates..